In mid November we attended a family wedding in Melbourne and decided to do a four day tour of Victoria with my sister Annie and her husband Trev on their cruisers. We hired a Harley through Eagle Rider. It was meant to be an Ultra Classic (repleat with comfy seats, passenger footboards - especially for Helen (the wife) and (for a change) a stereo) but the dickhead who hired before us failed to return it and we ended up having to "settle" with a Heritage Softail. Not a bad substitute I have to say. 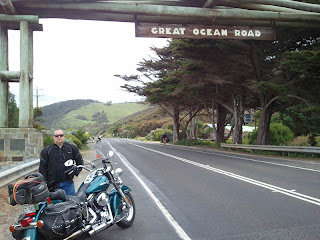 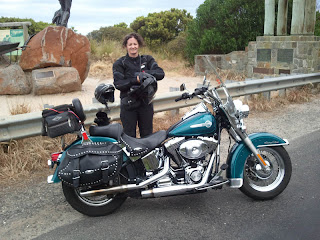 I'd never ridden a softail before and after riding the Triumph Rocket III for 10,000km it immediately felt small and it was nice to have both my heals on the ground for a change. It was grunty enough (although sluggish) but the wonderful exhaust note made up for it as we barked our way through the inner city streets of Melbourne. On the motorway out of Melbourne the bike settled into a steady beat and we enjoyed riding FREE on a toll road (hear that Stephen Joyce!!!). 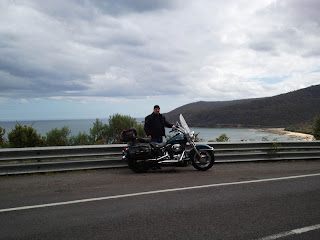 The plan was to ride south west to Anglesea where we started the Great Ocean Road along the Southern coast of Victoria. This road hugs the coast for over 200kms until it hits the Princes Highway near Warrnambool (our stop for the night). 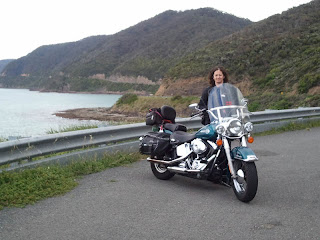 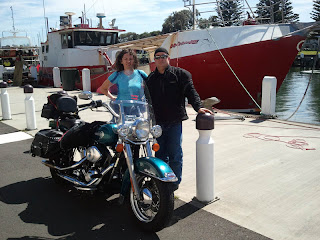 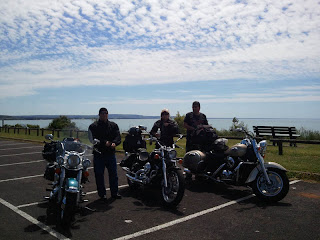 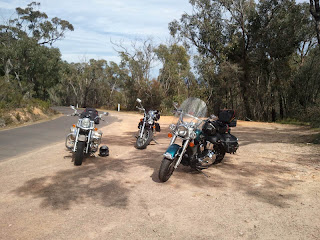 The Great Ocean Road road is amazing and has more corners than the rest of Australia’s roads put together – or it seemed that way. I was constantly reminded that I was on a low riding cruiser with repeated floorboard scrapes (followed by digs in the ribs from Helen). As we hugged the cliffs on this section of road the awesome sound of the Softail came into its own as it echoed its way around the many tight corners. If I was to try to compare it to a road in NZ I would say it was a mix of the Kaikoura coast road and West Coast Road (between Punakaiki and Westport) – but I wont try. 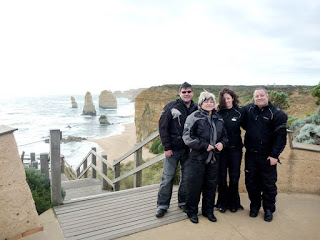 In the late afternoon we stopped at the famous 12 Apostles which are now down to 11 as one fell into the sea recently (see photos). 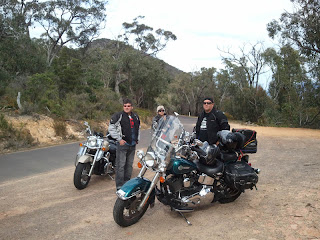 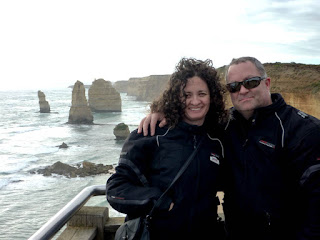 Day 2 saw a slap up breakfast in town and a beautiful sunny day with a high of around 28 degrees – perfect for riding in our summer gear. The route took us along the coast to Port Fairy, which is a small fishing village with lots of historic buildings and houses (see photos of us by some fishing boats). We travelled further south along the coast past a massive wind farm (you’d never get consent for one of those here!!!) and we had a big break at Portland, a nice coastal town which features a deep sea harbour and is one of many staging posts for Australia’s numerous minerals exports. The weather was fantastic and the sea views enjoyable as we watch huge ships manoeuvre in and out of the port.

The afternoon saw us heading northwards inland, where our guide Trev took us on some minor roads through rural Victoria. This is where we got our first real glimpse of the massive expanse of the rural heartland of Victoria and the roads were in great nick and virtually empty. We stopped at a tiny town comprising a pub, gas station and store (all in one) and supped on a few VB’s to re-hydrate and have a chat with the locals, who were friendly enough.

The ride took us to the rural town of Casterton where we munched on some pasties and other home cooking in a little bakery run by some hard case Aussie ladies. Following that, we headed back east through Coleraine and Hamilton to Dunkeld – our next nights lodging. This road was pretty rough in places and this slowed us down a bit. As we headed east, the Grampian Ranges came into sight and stood beacon-like in the otherwise wide and broad expanse of rural flatness – Crikey Australia is big!

Dunkeld is a small rural town – like many others in Victoria but it sits right at the footsteps of the Grampian Ranges – the only really hilly bit in Victoria. We stayed at the Royal Mail Hotel – an old converted post office with a fantastic restaurant and accommodation. This was really quality accommodation and was very reasonably priced.

Day Three involved a swing north through the Grampians National Park. Trev took as via a fantastic single lane rural road where Helen got to see a kangaroo hopping beside us (rather than immediately in front of us) and some incredible scenery (see photos of incredible scenery). We had a break at Halls Gap – a tourist town in the Grampians and headed eastwards again towards Daylesford. The Gampians was a real highlight of the trip and, to my surprise, rivalled the Great Ocean Road the day before. We were informed that the nine year drought that has plagued Australia for the last ... well, nine years ... had just broken and as a result the Grampians were at their most lush for a decade. Any trip around Victoria should include this national park, we reckon, and we hope to ride it again some day.

The rest of the day saw us ride through rural Victoria to Daylesford where we indulged ourselves a massage and some high quality accommodation overlooking a lake. The food, again, was of a very high standard. There is some really good local accommodation and food in rural Victoria.

Day 4 was a lazy ride back to Melbourne which we did via Woodend where we stopped at a local brewery (Holgate Brewhouse) and sampled all eight beers which ranged from pilsner to stout. All too soon we were back on the interstate cheek-by-jowl with semi-trucks heading into Melbourne.

It was a fantastic trip and the Softail was a great bike to do it on. Thanks to Annie and Trev for organising such great accommodation and food and taking us down some the best roads we have been on riding a bike. November is a good time to ride in Aussie as temperatures are not to hot and the spring rains usually captures the scenery at its best. This is the first real bike trip we have done outside New Zealand and it was great to ride new roads and experience new scenery. We will plan another Aussie trip soon we think.